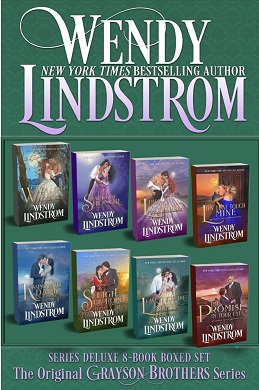 “This series is FABULOUS! Captured me from the beginning…I laughed, I cried, I was completely enthralled with the Grayson’s and their path to finding love.” –Mmoore

“The entire Grayson Brothers series is absolutely fantastic. How could you not love stories about four strong, brave, loving brothers? They are each so well written and just impossible to put down.” –Past Romance

Shades of Honor – Book One

The one woman he can’t have is the only woman he wants.

Everything Radford Grayson wanted was in his hometown: his beloved mother and brothers, and the unscarred part of himself he’d left behind. After surviving a gruesome war, all Radford wants is to work the family sawmill and make a real home for his young daughter. But Evelyn–his brother’s fiancee–reaches into his darkness with her healing love and makes him feel whole again for the first time in years. Torn between his unexpected and forbidden love for Evelyn and a desperate need to honor and protect his brother, Radford discovers that his fiercest enemy is his own heart. The one woman he cannot have is the only woman he wants.

A marriage of convenience…and intoxicating desire. He would show her every shade of love.

The last thing sawmill owner Kyle Grayson wants is a marriage of convenience, but a stroke of rotten luck leads him straight to the altar with his competitor’s daughter, Amelia. Burdened by guilt over his part in her father’s death and an intoxicating desire for his new wife, Kyle doesn’t think things can get worse–until his beautiful bride refuses to consummate their vows. Amelia’s struggle to hide her emotional wounds brings out the protector in Kyle, drawing them into a spirited romance neither anticipates. As they unravel a mystery at the mill and their own conflicted feelings, unexpected secrets threaten to shatter their fragile marriage. A fighter to his last breath, Kyle is determined to fan the flames of their fiery attraction and show his reluctant bride every facet of their undeniable passion–and his love.

Lips That Touch Mine – Book Three

A charming rogue…an abused woman. She greeted him with her gun–he disarmed her with his love.

Saloon owner Boyd Grayson is intrigued by his new neighbor, Claire Ashier, and considers her temperance crusade to shut down his noisy tavern nothing more than a game. While matching wits with the beautiful, aloof widow, he uncovers her torturous secrets that shock him to the core. Her pain affects him deeply, and he wants to free Claire from her self-imposed prison, but she guards her heart with a gun and memories she can’t forget. As the battle intensifies, so do their feelings for each other. Their unexpected friendship changes the game–and also Boyd. He vows to disarm Claire with his love and show her he is a man worthy of her trust…and her love.

Kissing In The Dark – Book Four

A woman with a hidden past. To protect her, he must risk everything…his badge…his heart.

Desperate circumstances set Faith Wilkins on the run and straight into Sheriff Duke Grayson’s protective arms. Duke believes Faith is a struggling widow, intelligent healer, and loving mother. Faith needs a husband, and Duke intends to be that man. Their blooming friendship and explosive attraction reinforce his decision to marry Faith. When he discovers that his beautiful new bride lied about her identity and is hiding from a man with the power to destroy their family, her betrayal slices to his core. He built his life and career on a foundation of fierce integrity, and his marriage to Faith is based on trust and a love deeper than any he has ever known. But as Duke uncovers her secrets and former life, the truth about his wife rocks their new marriage. Can he forgive Faith and put everything on the line–his badge, his family, his heart–to save their marriage and protect the woman he loves?

Experience the wonder of a Grayson family Christmas. SLEIGH OF HOPE is the prequel to Adam and Rebecca’s adult love story.

Two teens learn the meaning of love and the true spirit of giving.

Adam and his sweetheart Rebecca discover two boys huddled inside his sister’s warm greenhouse. December snow is falling hard and the boys are poorly clothed and hungry. They promise to find the boys a warm, loving home, but Adam never expects that home to be his own. Being an only son is not a position he wants to give up. But in trying to protect his place as an only son, will Adam lose what he wants most—to win Rebecca’s heart and become a man of integrity like his father and uncles?

Leave it for the Rain – Book Six

A Love She Couldn’t Remember… A Woman He Couldn’t Forget.

The instant Adam Dearborn met Rebecca Grayson, he knew he would love her for all time. Best friends since their awkward teens, Adam and Rebecca share an unwavering love, but Adam’s education and apprenticeship has delayed their union for six lonely years…
Now, Adam is finally home and ready to become a partner at the Grayson Sawmill and marry the woman he loves. But a tragic accident steals Rebecca’s memory on the eve of their wedding and leaves her broken. Suddenly, Adam is a stranger to her.
Devastated that his beautiful fiancée and best friend can’t remember their tender past or passionate plans for the future, Adam sets out to help Rebecca heal and to win her love all over again. But can they leave their pain to the rain and find their way back to each other’s hearts when the past seems lost forever?

When I Fall in Love – Book Seven

Hal Grayson has just buried his brother. He doesn’t need any more surprises — especially a mail order bride that he didn’t order. But the beautiful and strong-willed Miss Mitchell has other ideas. When the woman turns his life upside down, will he send her back, or will the captivating and spirited woman reawaken his grieving heart?

The Promise in Your Eyes – Book Eight

A Heartbroken Widow Vows She Will Never Love Again — A Reclusive Millionaire Plans To Prove Her Wrong.

Time has a way of healing broken hearts, but not for widow, Nancy Grayson. She has never stopped loving her deceased husband Hal. For years she has found contentment in tending her family — until a chance encounter with the reclusive millionaire Dawson Crane pries open her lonely heart. The handsome and charismatic man reawakens her need for companionship and the passion she has buried deep inside. But each step that takes her closer to Dawson betrays her love for Hal. Is it possible to love two men at the same time?

Can she let go of the love of her past and embrace the man who offers her a second chance at love?